Design a site like this with WordPress.com
Get started
Skip to content
Karley Icet Uncategorized April 3, 2020April 14, 2020 5 Minutes

◦ Women need men to take care of them

Ladies, if you have in the past/are currently constantly asked “When are you getting married? Are you dating anyone?  How long has it been since you’ve been on a date?” at weddings, family gatherings, church, or the hair salon raise your hand.

Women are often implicitly told that they are worth more when accompanied by a man. A single woman in her mid-late 30s is judged by “Hmm wonder what’s wrong with her?”  A single man in his mid-late 30s is praised for his focus on his career and his bachelor life is much more socially accepted. This double standard begins early on in life.  According to Cassano and Zeman (2010), in a study purposed to discover parents’ socialization of sadness, fathers in particular displayed more acceptance of and protection over their daughters’ emotional expression than their sons.  This speaks to the gender role expectation of men to hide emotional expression to appear tough which will be expounded upon in the next blog post. For now, this finding, if pushed beyond its level of effectiveness (father comes to rescue daughter every time she experiences a negative emotion instead of allowing her to struggle with it and learn to cope/grow) teaches her that she does not have the capacity for independence.  She needs a man.  This distorted perception may very well contribute to patterns of codependency (Codependency is an issue many clients today experience and will be discussed in a later post).

◦ Women must appear youthful and sexy

Women are expected to look perfect without looking like they are working for it. This is frequently introduced in how women appear in the media.  It is expected of women to stay youthful, fight aging, and make it look natural and effortless. How many eye wrinkle cream commercials do you see men in versus women?  In fact, it is much more acceptable for men to age because gray hair helps them to appear “distinguished” and powerful. The expectation to remain youthful is an embedded message that many women absorb, but remaining young is not the only impossible standard women are expected to meet.  Women’s bodies are constantly objectified in the media. See pictured below the double standard in objectification. The one exaggerating the male character’s rear is laughable, but the original poster is normalized. Women’s bodies are used to sell everything from beer to cars to hamburgers.  Men’s objectification is increasing (also not ok), but still not to the level of women’s. The combination of these messages tell women that their worth and identity revolves around their appearance. 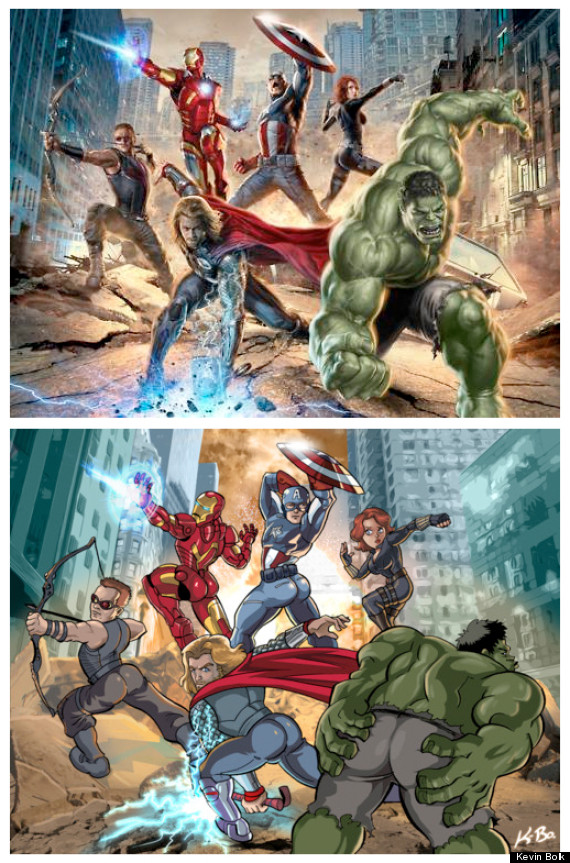 When expecting company, my mom often says to my dad, “If the house looks messy it reflects badly on me because I am the woman”.

My mom, along with all other women, have been socialized to understand that it is their responsibility to keep up with household chores and if they don’t they will be judged for their poor performance as a wife/mother. They have been trained to see their value attached to their household duties and their role as a mother and this is reinforced by the media. Last Christmas there was an ad on the radio that stated “You may think that getting your husband a tool for Christmas would be like him getting you a mop and a broom. It’s not! Get him what he really wants!” [insert eyeroll here]. The media is not the only evidence of this gendered expectation. In a study by Iwasaki, MacKay, and Ristock (2004) of individuals in managerial positions it was found that women experienced their lives as integrated (work, home, and their responsibility to/of others like their children), while men found personal/independent life of importance. The imprisoning piece of this expectation is that a woman can become invested in multiple areas without a partner to shoulder the burden. Further, if keeping house and being a mother has evolved into her only identity, important information about who she genuinely is beyond what she is responsible for is dismissed.

Scripture tells wives to submit to their husbands.  This scripture is frequently taken out of context to mean that wives must defer to their husbands as the only decision maker, or even that wives are expected to do exactly as their husbands demand.  It is not valid to assume that the Word commands wives to be under their husband’s thumb. The passage that uses the phrase submission is referring to protection and a covering. Husbands are given the role of a servant leader. Both men and women were given dominion over all living things on the earth.  They were given this dominion/authority at different levels. A husband’s dominion is to protect his wife as Christ protected and served the church by dying on a cross to protect the church from its sins. Wives are commanded to accept this protection and respect their husbands.

Consider this 2005 study: According to Tichenor’s research, wives who earned more in salary and occupational status continued to perform majority of the domestic tasks, and for half of those participating, this triggered disagreements within the relationship. Further, “Instead of using their unconventional circumstances to alter the conventional balance of marital power, spouses work together to reproduce men’s dominance in a variety of ways” (Tichenor, 2005, p. 197). Wives who earned more than their husbands would lose decision-making power in the relationship, but husbands who earned more than their wives would maintain their power. How is this imprisoning for women? Their voice is hushed. They can perform compliantly only for so long and then contempt and resentment takes its place.

If you enjoyed this post, please read “How Traditional Gender Role Expectations Can Be Imprisoning for Men”

Karley Icet, MS, LPC, NCC is a Clinical Mental Health Counselor who considers it a great privilege to join people where they are in their story and journey with them towards hope, healing, growth, and victory! She holds experience and education in a wide variety of counseling issues (trauma, anxiety, depression, grief, crisis intervention, affair recovery, and more) and populations (individuals, couples, and families) and is continuously committed to personal and professional growth. She is also an EMDR Therapy trained counseling professional. View all posts by Karley Icet